Top 5 Reasons Why You Should Learn Angular

Should I Learn Angular?

Ahh, a question as old as time. Grab a seat and let me tell you why I think you should learn Angular.

🚨 Spoiler alert: I think it's one of the best frameworks for you to learn.

As a developer you want a framework to make you feel empowered and productive. Angular does just that.

Angular is highly popular, productive, packed with a lively community, very well documented, and produces blazing-fast apps that can run on various platforms. It's no wonder Angular has established itself as one of the top three web frameworks. You can't go wrong with it. 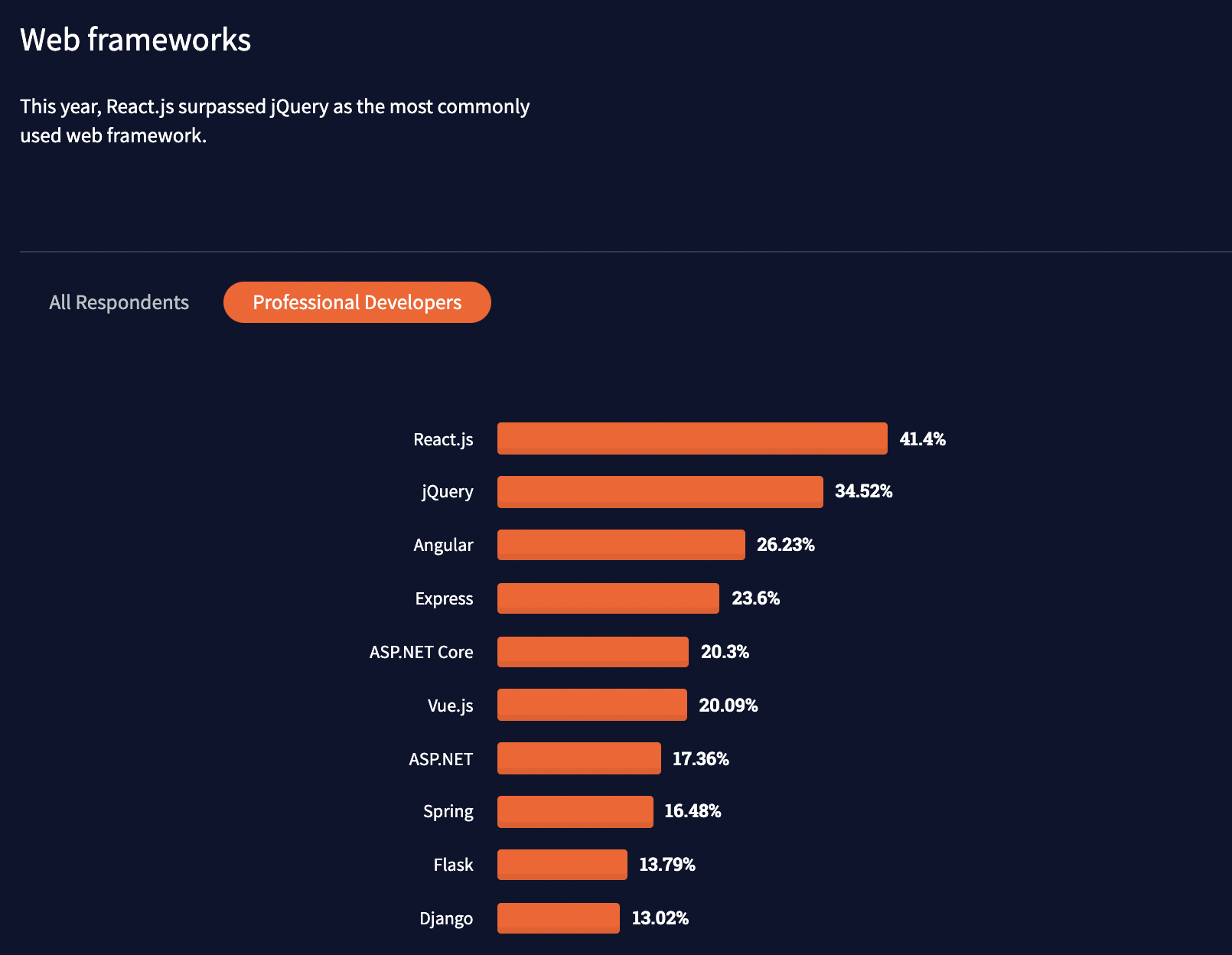 And in a digital world that's constantly evolving, Angular continually steps up to the plate to meet the demands of developers.

Luis, just give me the TL;DR

You got it! These are the 5 top reasons why you should learn Angular:

Before we dive into the nitty-gritty of each, feel free to also check out the free Angular Cheatsheet that I created. There's also a PDF version you can download 👇.

Reason #1️ why you should Angular: Type Safety

Angular puts the developer experience at the forefront.

JavaScript is known to introduce some of the most bizarre behavior known to developers. To alleviate headaches Angular provides full support for TypeScript, which offers type safety in our programs.

TypeScript existed for 4 years before even Angular became a framework, and the creators of Angular recognized the necessity for type safety in large enterprise apps to boost productivity and diminish bugs in production code.

So they opted to be one of the earliest adopters in the JavaScript ecosystem.

In my view this was the right move. TypeScript has seen widespread adoption and is a favorite among the community. In the most recent State of JavaScript Survey, 93% of responders were satisfied with TypeScript, so it appears Angular made the right call.

Many other frameworks have since followed suit, making Angular a trendsetter.

What is TypeScript anyways?

TypeScript is a superset of JavaScript. In simple terms, we can think of TypeScript as JavaScript with additional features. Thus, all JavaScript projects are fully functional under TypeScript.

Types are the main selling point of the language. To understand why let's look at a JavaScript code snippet.

In the example above, we have a basic function definition for calculating the sum of two values. What if we attempt to pass in a string and a number? JavaScript wouldn't complain. A value would be evaluated without error.

Misusing a function in our codebase can lead to difficult-to-track bugs. TypeScript resolves these issues by allowing developers to annotate a function's argument list and return type.

Annotating values allows the compiler to check your code for bugs intelligently. If the sum() function is invoked incorrectly, the compilation will fail. TypeScript will help you track the bug. This additional layer of validation can be helpful for programmers to debug their programs.

Reason #2️ why you should Angular: Angular encourages best practices

Maintaining a large enterprise application can be a nightmare without a proper setup. Before writing application logic, a strong foundation must be available to allow code reuse and scalability.

Angular introduces a set of features that encourage developers to adopt the best design pattern practices in your app. Some examples are singletons, dependency injection, and factory functions. These are design patterns that we can take advantage of right out of the box.

It sounds complicated, but I assure you it's not. Let's demystify the concept with an example.

In the example above, we are creating a new instance of a class called Car. It's assigned to a property called car. This can be a pain to deal with since instances must be created, maintained, and deleted.

Rather than dealing with this issue, Angular's got your back.

With dependency injection, instances are created and maintained on your behalf. All we have to do is add it to the argument list of the constructor() function.

During compilation, Angular will understand that you would like an instance of the Car class and the instance is "injected" by the framework.

For those who prefer to finetune this behavior, Angular's implementation of dependency injection is flexible.

Throughout history, developers have established that separation of concerns in any software is worth adopting. There are huge benefits such as encapsulation, clarity, reusable code, and division of labor.

Angular projects are riddled with files, but this is a good thing. It becomes evident as to what each file does relative to our project. Taking this a step further, classes are annotated with decorators to identify their roles within the framework.

Need to create a component? Use the @Component decorator. What about a directive? Apply the @Directive decorator. The roles of each class are clearly identifiable.

Your productivity is increased by pigeonholing the view layer of your software from the business logic of a component. You will be able to focus on the task at hand.

Reason #3️ why you should Angular: Regular releases

At the beginning of this article I stated that the digital world is constantly evolving. As developers, our job is to keep up with the latest trends.

Angular is a framework developed by Google. The words "complacent" or "stagnant" are not the type of words that are associated with a company like Google.

You can expect Google to properly maintain its framework with the latest and best practices in mind. In fact, the lead developers have pledged to release major versions every 6 months. It's like having Christmas twice a year!

Okay but seriously, you never have to worry about Angular becoming outdated. The project maintainers are constantly looking to improve the framework by supporting the latest versions of package dependencies, deprecating old features, providing proper documentation, and optimizing their engines.

Reason #4️ why you should Angular: Support from Google

Admittedly this is somewhat related to my previous point, but I want to expand on it (plus 5 reasons to learn Angular just feels better than 4 y'know?).

Even though Angular is open source, Google finances the project's endeavors generously.

Angular is not just a framework - it's an ecosystem of packages to solve some of the common challenges you'll face.

Need a router? Not a problem! Not a designer? Angular has a package that exports dozens of UI elements for prototyping an app. What about connecting to Firebase? There's a package for that.

Reason #5️ why you should Angular: Designed for Enterprise-Level apps

Many frameworks out there are minimal. This forces the developer to consider the best way to structure a project.

While convenient, this can lead to some pitfalls. You can run into scalability issues. Also, onboarding new developers can be time-consuming since they need to learn the structure and design patterns of your project.

Angular avoids this issue altogether by providing a default directory structure and organization within your project. The CLI will help you with generating appropriate file names.

Developers who are familiar with Angular will immediately recognize many of the practices within your project. This familiarity immensely boosts productivity. Being able to jump into a project with little help is highly valuable, both for the existing team on the project and the newbies!

Lightning-fast performance, helpful tooling, and a vibrant community are the pillars of any framework worth its salt. Angular offers these points and so much more.

Want to know how to start learning Angular? Well you have a couple options that I personally recommend.

Angular Templates offers its "Angular tutorial" that is a great free resource to learn from.

If you want to take the next step, the best way to learn Angular (in my slightly biased but honest opinion) is with my brand new bootcamp, Complete Angular Developer in 2022: Zero to Mastery.

My goal with this course is to help you learn Angular from scratch in a way that allows you to really understand Angular so that you're able to use it yourself when you're out in the wild (a.k.a. the real world).

The coolest part of this course is that you'll build a massive video sharing application for gamers using Angular, along with TypeScript, WebAssembly, Rust, RxJS, TailwindCSS, and Firebase.

By the end, you'll have a robust (and fun!) real-world project to add to your portfolio. This is a full-stack app unlike what you'd find in any other Angular tutorial online.

Plus you'll get to learn alongside 1,000's of fellow students (and myself!) in our active online Discord community

I put a ton of time into this course and along with the ZTM community, I think it's the best Angular course online. But that's for you to judge which is why we offer a 30-day money back guarantee.

Oh... and you can also try some of the lessons for free. No credit card or signup needed. Just click any lessons with a Preview button.

You've got nothing to lose!

Now you might also be asking: how long does it take to learn Angular?

I wish there was an easy answer. Everyone is different. It will depend on how much time you can dedicate each day, what your previous experience is, and what your goals are.

What I can tell you is that this Angular Bootcamp course is 25.5 hours of video tutorials (and constantly being updated & expanded). But watching tutorials won't make you learn Angular.

So you'll need to spend a lot more time actually working on the projects and exercises in the course. This is where your true learning will happen.

Last thing... I've also created a free Angular Cheatsheet for students of the course but we've now made it free for anyone to use. There's also a PDF version you can download. Learn Angular from a Senior Developer. The only Angular course you need to learn Angular, build large-scale apps from scratch & get hired as an Angular Developer in 2022.

Popular
June 26th, 2018 · 13 min read
Don’t be a Junior Developer: The Roadmap From Junior to Senior

Andrei Neagoie
Must Read
May 27th, 2022 · 13 min read
Getting Started With Animations For Angular: Fade + FadeSlide

Do you want to improve the user experience for your angular app? Learn how to set up simple animations today!

10 methods that you can use to get paid while still learning how to code (with examples).