Wait, didn’t I already write about this?

Well… yes, but too many of you complained about not picking one for you. So here is something for those that love concrete numbers and statistics.

If you haven't read Part 1 yet, do that first.

We are going to look at job postings, developer statistics, download numbers, and other factors, to actually burst through the fuzzy cloud that is React vs. Angular vs. Vue and decide which one you should learn for your career.

The goal is to conduct an unbiased search based on the criteria:

In this article you will find sections on the above topics.

Remember from Part 1 that each of these frameworks has their pros and cons. But if you don't care and just want to accelerate your career as quickly as possible then here is how you should pick which one to learn.

Ideally, you will pick the tool that:

Important: Every once in a while, I will throw my 2 cents on the topic, but as with everything, you should do your own research and decide for yourself what to learn and master. I’ve written about this before. I provide for you some numbers that you can use and expand on them as you want, to decide for yourself.

Data below is current as of initial writing (December 10th, 2018) unless otherwise noted.

I would venture a guess that this is one of the most, if not the most important factor for you in deciding what to learn in your career. After all, time is a valuable resource. With so many things to learn, you want to make sure you pick the one that makes you money. Let’s have a look at the numbers:

What are the number of job postings for React, Angular and Vue developers? And the actual numbers:

My criteria for selecting the data was the following:

LinkedIn is one of, if not the biggest job board. This is a worldwide search for developer job postings for each library.

Indeed, SimplyHired and Dice are 3 big tech job boards in the USA so the search is geographically targeted there. You may not live in the US, but it’s good to see what is happening in a very important location for tech.

AngelList is probably the best job board for startups. We get to see what startups, and the newer more modern companies are using in tech.

Hired is a hiring platform that helps companies look for engineering talent. It’s interesting to see their perspective on what companies are looking for as they tend to only post work from the large tech companies.

Remote is a special section I added for fun. I used remote jobs found on indeed.com as well as remote.co as a way to gauge how many remote job opportunities are available for each of the 3 libraries.

React and Angular are the top dogs. This is not surprising for React since for the past few years, it has been the most trending front end library (more on this later). But it’s surprising to see Angular with places like State of JS calling it “dead” in 2019. Another surprising thing is how low Vue.js demand is despite all of the love it got recently in the State of JS survey by developers.

Learn React or Angular if you are looking to have the most options for employment.

Let’s have a look at what developer usage looks like across React, Angular and Vue.

Here are the total number of downloads by developers from NPM (as of December 20th, 2021): 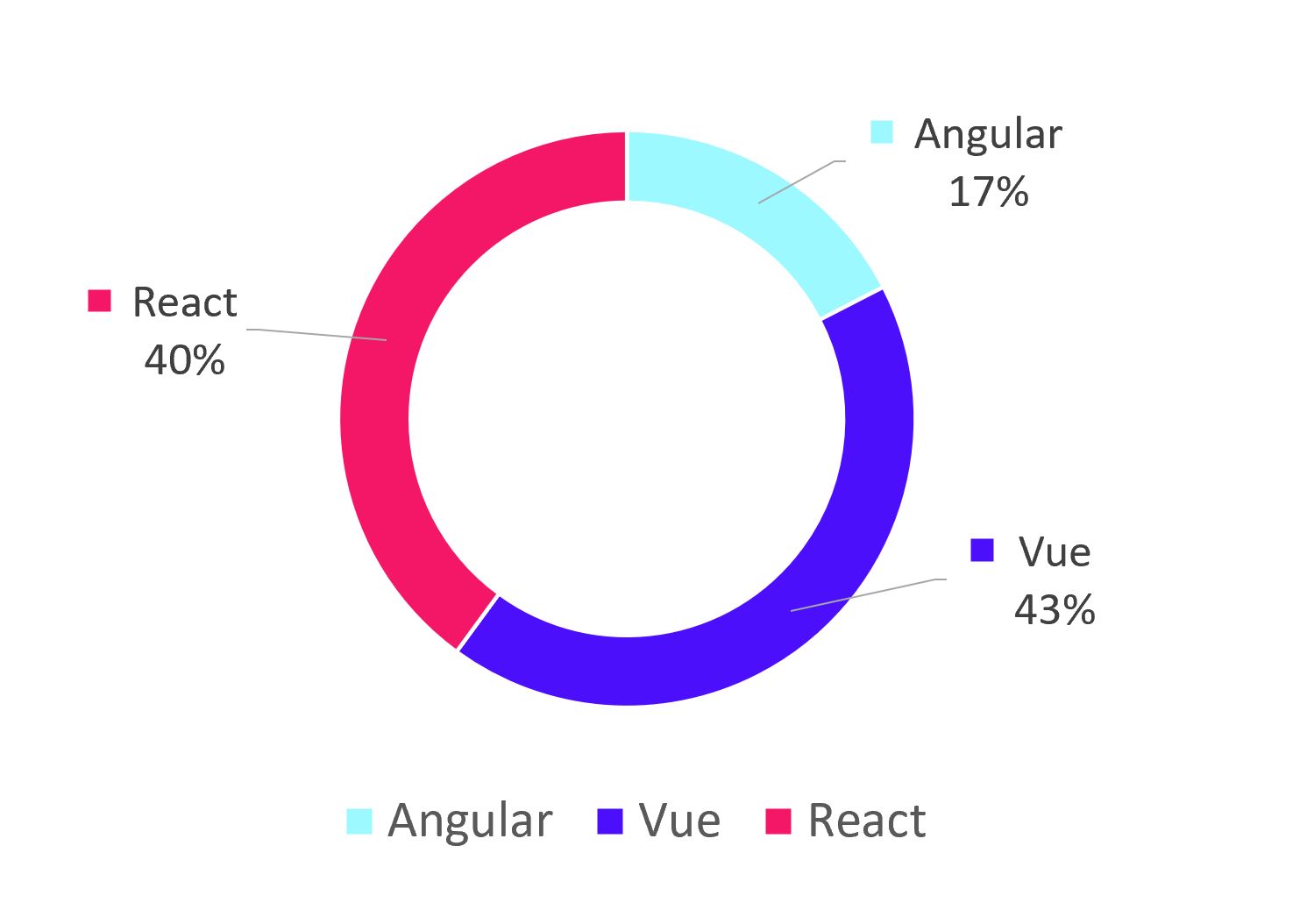 But if we look at top open source projects we see Angular and React in there (kind of) but no Vue:

And here are the google trends based on search terms (as of December 20th, 2021 - this could technically be related to job demand as well): 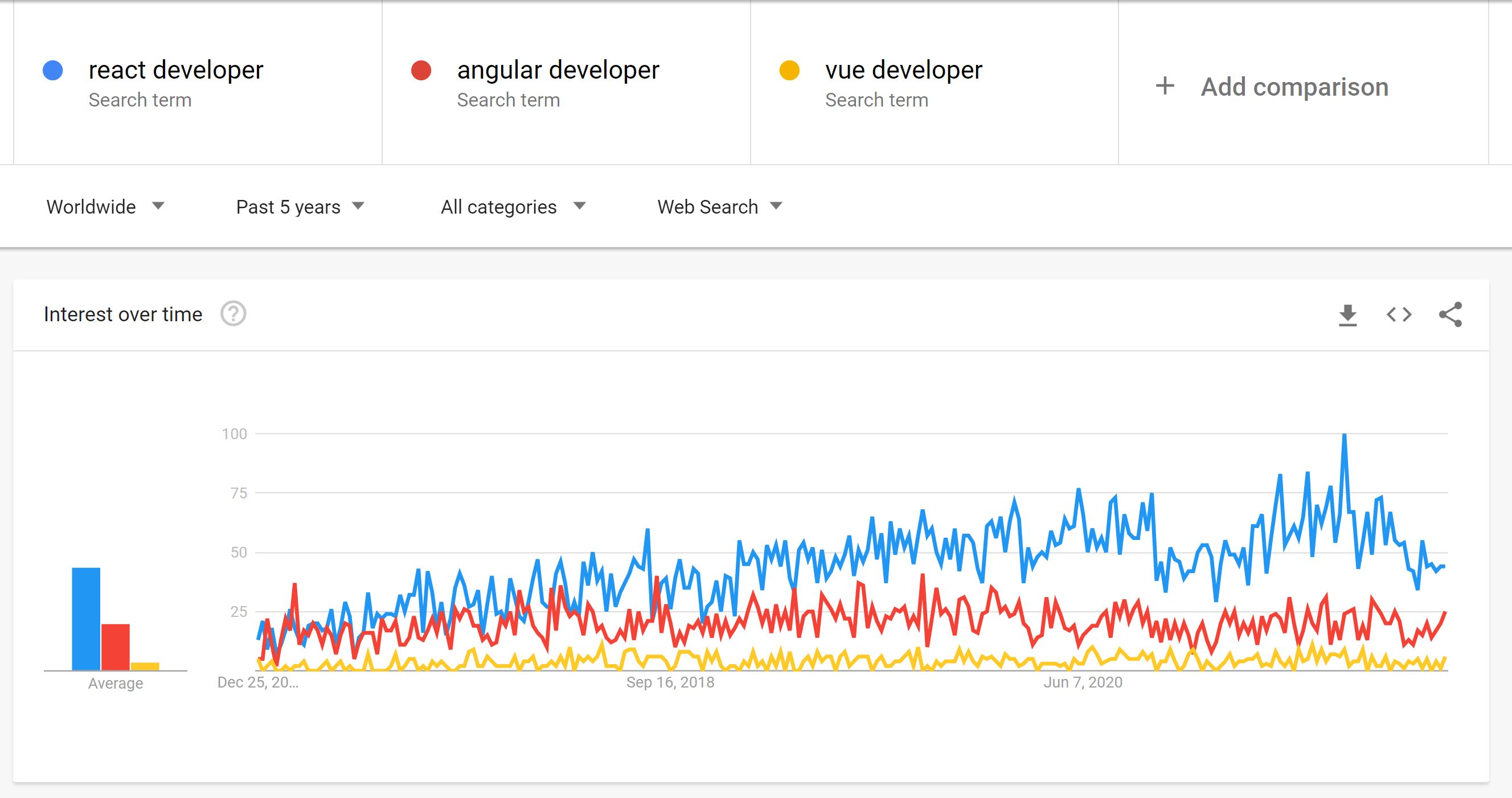 And another google trend with slightly different terms (as of December 20th, 2021): 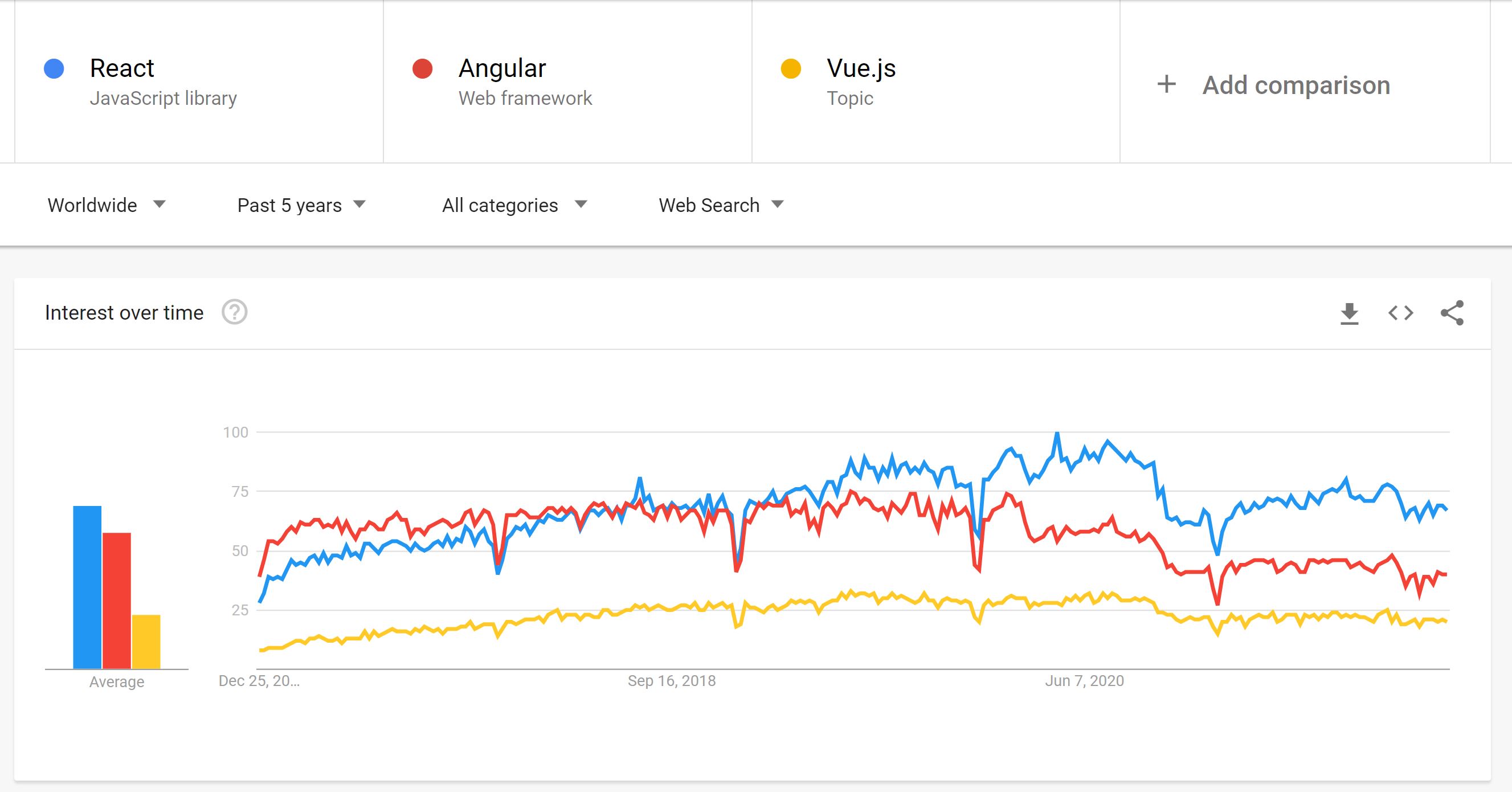 Overall, we see positive growth in all of these libraries when it comes to downloads and Github activity. Developers are using these libraries, that is not in question. But we definitely see a disproportionate split between Github stars and actual usage of Vue.js. Overall, Vue.js once again does not compete yet with Angular and React. It looks like the growth for Angular and React are starting to slow down a bit though.

React seems to have good developer activity in relation to the actual usage by developers. Angular seems to come in second, and Vue once again does not seem to get used as much as people may think (although there seems to be a higher usage trend in China). Although the slowdown in React and Angular usage may mean it’s due to some users going over to Vue. If you are a developer there are probably going to be more documentation, blog posts, and activity around the eco system for React than for Angular or Vue. Stick to React if that is important to you.

Quick note: Vue is often used by Chinese giants such as Alibaba, Baidu, Tencent, even Xiaomi and DJI instead of React or Angular which were created by Facebook and Google. I expect the Chinese market to keep growing especially fast because Vue is an open source independent library without any attachment to a western big tech giant (no data to back up this point).

You must love the tools that you are working with. Although money is important, it is not everything. Ideally you want to be working with something you enjoy. Let’s have a look at the numbers here.

From StackOverflow survey (probably the best survey there is for developer trends) Wanted, Loved, and Dreaded by Developers: Here are the stats for most wanted, loved, and dreaded from the 2020 survey. Spoiler: Vue.js makes a big jump in the most loved list (but still behind React) and Angular is now #1 on most dreaded 😱

From stateofJS survey, which unfortunately is geared more towards early adopters and React and Vue communities so the data is a little bit biased:

Nothing new that we haven’t seen before. React seems to be loved by its developers and people seem most happy overall with this library.

React seems to beat out Angular in every data point above, but not by a big margin.

Although the state of JS survey shows a lot of people dissatisfied with Angular and StackOverflow mentioning people don’t like it as much as React and Vue.js, as we saw in previous part, the job demand is still there for it.

Vue once again is a small part in this, and although we see that the Vue community is very passionate about Vue, it’s still a smaller player… but good to keep an eye on.

If you want to be happy and have the best experience when you are developing, React or Vue is your best choice.

But this is the most important part

The above graphs all show a snapshot in time at the writing of this article (with some stats updated for you).

Ideally, you want to see as long of a trend of the numbers as possible (especially job postings) to make sure you aren’t riding a dying wave, or a hype-only wave.

However, I can tell you that since initially writing this post in December 2018, the conclusions generally seem to still hold true as of December 2021.

It’s always important to draw your own conclusions. BUT, just because you asked nicely, my opinion is that React is still the way to go in 2022 (it was also my recommendation for the past few years) based on the information above.

React seems to do the best job at hitting all of these factors. This doesn’t mean you should forget about Angular or Vue. They are all still great libraries and frameworks. And nothing lasts forever.

So if you have limited time and you shouted “TELL ME! JUST TELL ME ONE TO STUDY AND LEARN” and you yell really loud, I would tell you to learn React.

What do you want to see next? I’m thinking of doing this type of tech trends analysis on other topics around programming and releasing them every once in a while. Tell me here and make sure to also tag @zerotomasteryio.

Let me know if you want to see more!

Final reminder. Everybody has their own opinion and each tool exists to solve a problem. There is no winner take all in the tech space (at least not until AI bots by BostonDynamics take over our world), so be smart and just use the data from here and your own, to make an informed decision based on your needs.

By the way, all the courses I teach for programmers keeps this methodology in mind to teach you the most modern and important skills in the industry to make you valuable to employers. They’re pretty good courses (if I do say so myself) so if you’re interested in leveling up your skills, do check them out.

December 2021 Update: I still feel strongly about the takeaways and conclusions from this post. But if you're not sure where to start or still don't know which path to take, try out our Tech Career Path Quiz to get a personalized step-by-step roadmap to follow.

By the way, my full time job is to teach people to code in the most efficient way possible as the Lead Instructor of Zero To Mastery Academy. You can see a few of my courses below or see all of the Zero To Mastery courses by visiting the courses page. Learn from React.js experts. This is the only React JS tutorial + projects course you need to learn React, build advanced large-scale applications from scratch and get hired as a React Developer in 2022. Learn Angular from a Senior Developer. The only Angular course you need to learn Angular, build large-scale apps from scratch & get hired as an Angular Developer in 2022. The only Vue.js tutorial + projects course you need to learn Vue (including all new Vue 3 features), build large-scale Vue applications from scratch & get hired as a Vue Developer in 2022. Go from Zero To VUE Mastery.

Popular
May 18th, 2021 · 13 min read
ZTM Career Paths: Your Roadmap to a Successful Career in Tech

Whether you’re a beginner or an experienced professional, figuring out the right next step in your career or changing careers altogether can be overwhelming. We created ZTM Career Paths to give you a clear step-by-step roadmap to a successful career.

Spoiler: It doesn’t matter. If you want to be a great programmer, you need to change your mindset and stop thinking in terms of what is best to use. What wins? What will get you the highest salary? What is the best for the situation at hand?